Conman at the Movies started a blogathon (thanks as always to the ever-amazing Drew at A Fistful of Films for shining the light) that is just too good to not participate in. Inspired by the best film of 2015 thus far, Pixar's Inside Out, the Film Emotion blogathon is about finding a film that stands in for each of the main emotions in the film: 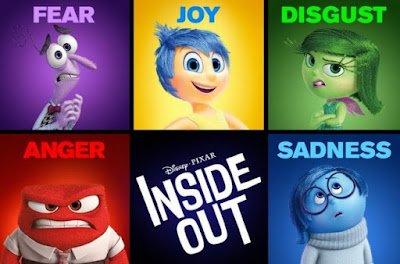 So without further ado, here we go! 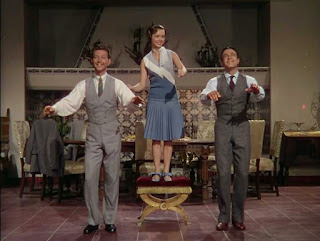 Joy - I have a number of go-to movies when I'm in a bad mood, but the one that I probably turn to the most is Singin' in the Rain. Not only is it my #1 All-Time Favorite Film, but it is by far the one that gives me the most pure, unadulterated joy. I could just put on Donald O'Connor's brilliant "Make 'Em Laugh" number, but why would I want to deny myself the joy of the opening "Fit As A Fiddle" segment? Or the first meeting between Gene Kelly's Don Lockwood and Debbie Reynolds's Kathy Seldin? Or the one-two punch of joyousness that is "Good Morning" into the title number? Whenever I'm feeling down, any second of this movie will instantly make me happy again. 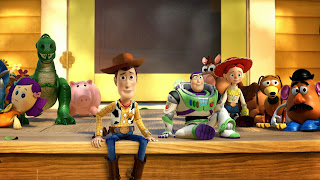 Sadness - I'm sure I've written this story a million times on the internet, but I don't think I've ever done so here. When I first saw Toy Story 3, I was in tears from the incinerator scene onward. And not polite little tears welling up in my eyes and dripping down my cheeks, either. I'm talking a goddamn RIVER of tears streaming down my face and great, loud, heaving SOBS in a completely packed movie theater. Every little thing about the last fifteen minutes of this beautiful film just hit me like a ton of bricks in different ways. I won't go into it all here, but this movie was one of a few that actually made me look at my life, assess it, and make a change. Even now, just thinking about that PERFECT final scene makes me choke up a little bit. 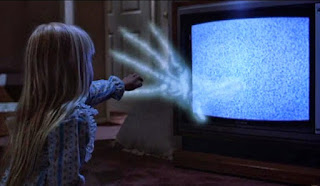 Fear - Oddly enough, the film that cost me the most hours of sleep is one that I haven't even seen, but one that I've only seen little bits of: Poltergeist. It's all about the TV. The one recurring nightmare I've ever had is one where I turn a TV off but it keeps turning on by itself, sometimes to static and sometimes to something that I don't know what it is. I've traced it to seeing the previews for this on TV when I was REALLY young. Thankfully, The Ring came out when I was much older, so even though those dreams started up again after seeing it, I was able to handle them much better. 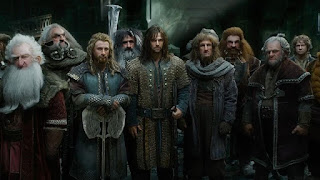 Anger - SIGH. I've never been so offended by a film's quality that thinking about it actually fills me with rage. I've come close precisely once - Star Wars Episode II: Attack of the Clones - but mostly I didn't actively hate it, rather I was just bored by it. HOWEVER, I truly detest The Hobbit: The Battle of the Five Armies for the mere act of EXISTING. So much so that I haven't even seen it yet. There is simply no good goddamned reason to make that book into three movies. NONE. And given the padding present in both An Unexpected Journey and The Desolation of Smaug, I just don't have the patience to sit through another one of these movies. Which pains me so much, because I am a full-on fanboy of the Lord of the Rings trilogy. And then Peter Jackson went entirely up his own ass and turned my favorite book into a slog (Benedict Cumberbatch's AWESOME Smaug notwithstanding). 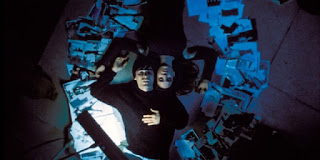 Disgust - There are plenty of films that I've seen that I don't feel the need to watch ever again, but only a select few that are so difficult to watch that I specifically don't WANT to watch ever again. The big kahuna of those is easily Requiem for a Dream, a film that makes me cringe so much that I just want to curl up into a little ball and die. I'm not sure exactly when that pit in my stomach opens up, but by the time Jennifer Connelly... I can't even write about it here it's so awful. Given that the film's subject matter is drugs and drug addiction, I have no doubt that that's the feeling the film was meant to leave us with. So job well done, everyone, but... I can't watch your film again. EVER.
Posted by Daniel at 10:59 PM

Email ThisBlogThis!Share to TwitterShare to FacebookShare to Pinterest
Labels: 00s, 50s, 80s, All-Time Favorite, blogathon, film, Hollywood, Inside Out, movies, Poltergeist, Requiem for a Dream, Singin In The Rain, The Hobbit, Toy Story 3