Against the Crowd Blogathon 2017 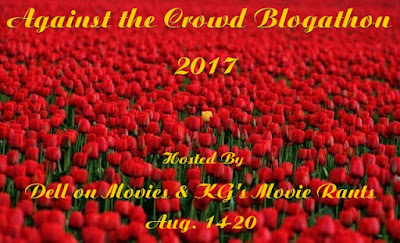 Yes, it is time once again for Dell on Movies and KG's Movie Rants's Annual Against the Crowd Blogathon! And I have to say, while I adore this blogathon, it gets harder and harder to do every year, because I generally don't see movies that get bad reviews - life is too short and funds are too scarce to waste on bad movies, y'all.

BUT! I persevere. I do it for you, dear reader. And, I mean, I also do it for me, because I like writing these, but...

This seems to have gotten away from me. ANYWAY. To the business at hand!

For what it's worth, I didn't hate this completely. For the first three-quarters, it's a masterpiece of escalating tension. We watch a family of three in a post-apocalyptic world euthanize the grandfather of the family unit (surmising that he has succumbed to whatever disease infected most of the world), go about their daily lives trying to just make it to the next day alive, and then deal with a younger man foraging for food and shelter for his wife and young son. They decide to grant this new family shelter, and for a while they get along just fine. But then, the movie so epically shits the bed that I ended up wondering what the whole point was, other than "People Are Awful". It moves from a tension-filled dark fable to an exercise in miserablism in the stroke of a single plot point, and even reading interviews where Shults said he came up with the story after the death of a close family member didn't do anything to make me see the movie in a different light. Why choose to tell THIS story in this way? It doesn't make sense. And neither do the great reviews.

And also, if you call your film It Comes At Night, maybe, I don't know... SOMETHING SHOULD FUCKING COME AT FUCKING NIGHT.

But anyway, if that offended you, prepare yourself, because I'm about to defend...

For what it's worth, I don't think this is some unheralded masterpiece of cinema or anything. I just think it got a lot more flack than it deserved. A lot of people took issue with the fact that movie centers around Chris Pratt's decision to wake up Jennifer Lawrence against her will (because he somehow falls in love with her just by looking at her and reading about her), and then lies to her about it for a long while. But the thing is, he doesn't make that decision lightly, and the movie gives great weight to his decision - and never lets him off the hook for it, either.

Once you're able to put that aside (and I really don't think it takes very much to do so), Passengers is a slick slice of classic Hollywood sci-fi escapism. It's beautiful to look at and listen to, and requires almost no work from your brain. It may not be a GREAT movie, or even a really good one. But it's pretty far from what I would call terrible. The expensive-looking production design and visual effects and combined charisma of Lawrence and Pratt elevate it from merely passable to good. I enjoyed it a whole lot more than I ever thought I was going to based on the reviews, from critics and movie fans alike.

And there you have it! I'm not swimming too hard against the crowd here (I rate both of them 2.5-3 stars out of five), but what can I say? Recently, I've pretty much been with the consensus. These were the two most notable exceptions I could think of.
Posted by Daniel at 2:27 PM