This week's Hit Me With Your Best Shot is Mary Poppins, and I desperately wanted to participate, both because I haven't done so at all in the second half of this season (much less blogged at all), and because I have always loved Mary Poppins. But, lo and behold, I find myself incapable of truly doing so! You see, so many of my favorite parts of Mary Poppins, the parts I really want to talk about, didn't really include any shots that made me sit up in my seat and take notice. It's a remarkably well-constructed film, one that actually gets better as it goes along, but most of the cinematography is unremarkable, except for some stunning nighttime shots of the London roofscape...
...which I largely suspect to be matte paintings.

I really wanted to go with something from "Feed the Birds", the most haunting lullaby Disney ever produced, because it always exerted a strange hypnotic pull over me when I was younger. Those shots of the cathedral, blurred around the edges, with the almost see-thru birds flying around it are incredibly affecting, but not a single one of them really summed up the number.

Mary Poppins is quite sneaky that way, bringing in some things quite radical for a children's film. For one, there isn't really a plot, for another, there are several ballads (like "Feed the Birds") that threaten to put kids to sleep but actually deepen the film and the characters. And for another, it's very anti-establishment: Mrs. Banks is a suffragette, at one point making sure that her maid put rotten eggs in her bag so that she can throw them at the Prime Minister in Downing Street, and Mr. Banks is a banker at quite possibly the creepiest bank ever in the history of the world: 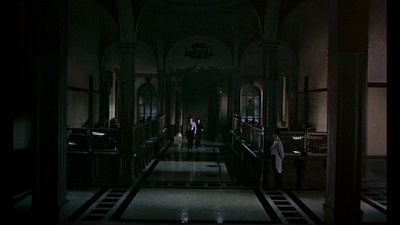 And I so love how little Michael starts what must be a total economic meltdown after he tries to take back his tuppence from the greedy Bank President (who, let's be honest, basically stole it from him anyway). A surprisingly prescient moment, teaching children how silly adults get about money. But again, there are no really great shots in that bank melee.

So, I am forced to instead talk about one of the greatest dance numbers ever filmed, "Step In Time". And even here I find myself at a loss for words, except that I adore the way choreographer Marc Breaux (whose next project was Julie Andrews'  next film, The Sound of Music) uses absolutely everything you could conceivably find on a rooftop, having the chimney sweeps dance on railings, climb up and down smokestacks, dance over and balance on the lip at the edge of the roof... it's ingenius, fun choreography, and takes a very silly, overly simple song and turns it into a major production number entirely worth it's eight-minute length. It's filmed really smartly, balancing mid-shots, long shots, and close-ups quite well, letting us in on the fun while still letting us see the dancing as much as possible (although there are probably a few too many reaction shots from the kids, who are, shall we say, not the greatest actors Disney ever found). Yes, now that I'm older I can see the seams show when Julie Andrews jumps up in the air for her multiple tours, but when I was a kid, my jaw always dropped. The performances of Dick Van Dyke and the rest of the ensemble help greatly, too - they make it infectious. Seeing this number, you would think it would be great fun to be a chimney sweep, no?

And I love when the soot-stained crew travels down the chimney into the spic-and-span Banks household, possibly even more than the rooftop shenanigans, as they flip the maid, chase the cook, march for women's rights with Mrs. Banks, and leave a befuddled Mr. Banks shouting "What's all this?!?" over and over and over (David Tomlinson never fails to make me lol when he gets frustrated). And that final shot of them all dancing, jigging, and backflipping down the street is a glorious fade-out to the number.

And yeah, I know the silhouette of the dancers dancing on the chimneys is a beaut, but my favorite shot has always been this one, which immediately precedes that iconic shot: 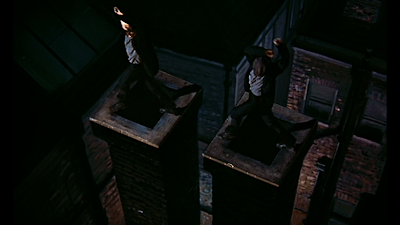 It's an ever-so-slightly vertiginous shot, totally selling that this entire number is actually taking place on the rooftops of London and not on a soundstage somewhere, maybe 5 feet off the ground. With the added danger of dancing over a hole! One foot wrong and down you go!

Dammit, now I'm never going to get that song out of my head. Ah well, the movie's been in there for years, and it's quite delightful to have around.

Favorite moment: walking on hands between the rooftops, then dropping down, hanging on only by the feet
Length: approx. 8:10
Number of cuts: 96
Posted by Daniel at 9:50 PM No comments: