Hit Me With Your Best Shot - The Bad And The Beautiful

This post will be brief only by necessity, as I'm in rehearsals right now and am just flat exhausted. But this week's selection for Hit Me With Your Best Shot was on TCM last weekend, when I actually had a moment to breathe, so I watched it and just had to write about it.

This was the first time I had seen Vincente Minnelli's The Bad And The Beautiful, and I enjoyed every delicious, Hollywood-insidery moment of it (I don't know what Gloria Grahame was doing winning an Oscar for a glorified cameo when Jean Hagen was digging up comic gold right and left in Singin' In The Rain, but the Academy's shocking disdain for Stanley Donen and Gene Kelly's masterpiece is neither here nor there). The whole thing is a movie-lover's wet dream, with Lana Turner being fabulous, Kirk Douglas being despicable, and tons of backstage so-THAT'S-how-they-make-movies tidbits and stunning tracking shots following the filming of tracking shots.

But as much as it is about the making of Hollywood films and the making (and un-making) of Hollywood careers, what the film was really about, to me, was the pull of artistic genius. In my life in the theater, I've come across my fair share of brilliant people who exert this strange pull on all those around them. You can't quite describe it, except to say that they could talk you into doing just about anything, despite the fact that you know there are invisible, potentially dangerous strings attached. No matter how many times they burn you, you keep coming back when they call, because they bring something out of you that no one else does. It's very much like a disfunctional relationship with a toxic lover - you know they're bad for you, but the sex is so good that you can't stay away.

Anyway, that's part of why the final shot of The Bad And The Beautiful seemed so perfect to me. While Kirk Douglas's defeated asshole of a producer pitches his new film idea, the one that will bring him back from poverty, to his old partner, the actress, director, and writer he burned along his way to glory listen in, going from this: 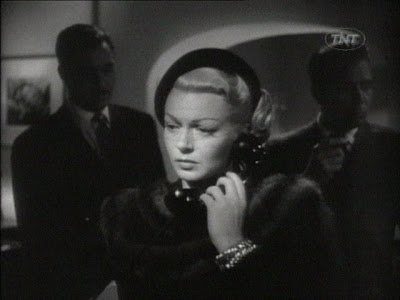 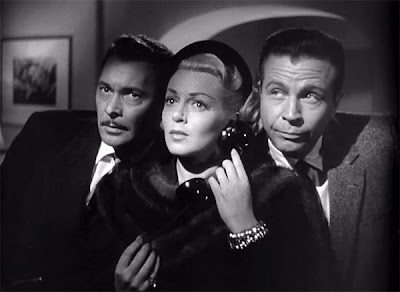 Come ON. That is a perfectly lit and composed shot. And, as each of them slowly comes into the light, it mimics the film's trifurcated structure. It also shows the irresistible pull of those damned artistic genius assholes. Even when your better judgment is begging you to leave them alone, there's always that little voice inside you, nudging you ever closer to their orbit, stroking your ego if only to prepare it for the inevitable crash to earth. For all the fun this film is, that's a pretty powerful note to end on.
Posted by Daniel at 11:37 PM No comments: