Hit Me With Your Best Shot - Mean Girls

I didn't love it or anything, but it was generally an agreeable time of my life, when I wasn't stressing over GPAs and SAT scores. See, my high school was the largest in the state of Connecticut, and at one point while I was a student there, our ethnic make-up mirrored that of the United States exactly - it was literally a microcosm of the world we lived in. I had my group of friends, and all of us were able to go through our day without being bothered by bullies - the bullies being too busy hanging with their friends and/or getting into gang fights (on and off school grounds) to bother with us. 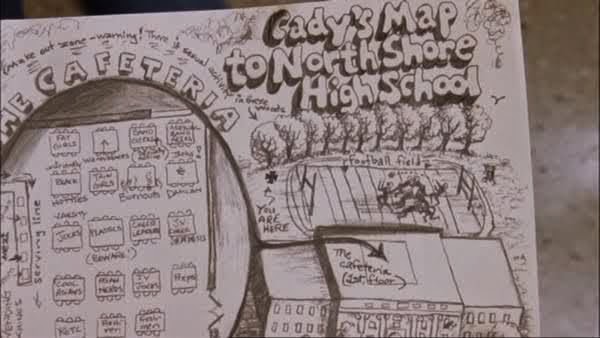 I was one of those kids who always genuinely liked going to school, which made me extremely uncool for a long period of my youth, but in high school, all of my classes were with kids who also liked school, or at least who took it seriously, so I was good. I was never popular, but I did the annual school musical, was in the band for one year, and was also on the mock trial team, the literary magazine, and the yearbook staff (I was Editor-in-Chief my senior year - which means absolutely nothing now but I still love to brag about it), so I knew a lot of people who mostly seemed to like me. Oh, I'm sure some people said mean things behind my back, because I was that type of kid, but all the mean girls and boys were too focused on other things to waste time taunting me to my face.

While I liked The Breakfast Club and Heathers and Clueless as much as anyone else, but I never felt like any of those movies really got what high school was to me. And when Mean Girls came out in 2004, when I was in college, I was expecting another Hollywood High School Movie. One that didn't match my experience of high school at all. I did not expect it to hit home, but the first half of it did. BIG TIME. And not in the way I expected.

Because, you see, middle school?

Middle school, for me, was AWFUL.

And the worst part of middle school was lunch. I didn't really have friends in middle school, so on the all-important first day of each year, I would always try to be among the first in the cafeteria so I could stake a claim to a table and not be subjected to the awful, awful sensation of standing all alone and asking people who either didn't like me or whom I didn't know if I could sit with them - and then have the possibility of being rejected, not just for that day, but for an entire year.

It was THE WORST.

But, a few months into every year, a sort of reprieve would come. In sixth grade I was accepted into our middle school's steel drum band. (What, your school didn't have one?) Since it was an after-school thing, the band director would allow us to get the key to the steel drum room (what, your school didn't have one?) so we could practice during our lunch period. I liked it in the steel drum room. It was big and quiet, and I could do pretty much whatever I liked. But mostly, I liked it because I didn't have to be around other people who might tease me for forty-five minutes, or interact with people for long periods of time when all I wanted to do was read. I could be by myself and eat my lunch in peace. Sometimes, those were my favorite lunch periods in middle school. Other times, they were the worst, because it just reinforced my feelings as a loser who was all alone and had no friends.

So imagine my shock when in the first reel of Mean Girls, Lindsay Lohan can't find a place to sit in the cafeteria, and instead eats lunch in a bathroom stall.

This has always been my favorite part of Mean Girls, moreso than the incredible, iconic comic lines and performances, because I so get what that feels like. But what's even better than that first scene, is this later one, my pick for Best Shot, which has actually accrued more meaning over time as we've watched what has happened to the actress it contains:

Cady was popular, until she wasn't. And all the pretty clothes, hair products, and makeup in the world couldn't cover up the fact that she was still "Africa" - the girl who had been raised and educated by her parents in a non-social setting. And so when everyone has turned on her, where does she go to eat lunch? Back to the bathroom stall. It's crushing. And the shot is perfectly designed. between the blue walls and the blue lunch tray, Cady is almost completely boxed in. Add in the blues in her shirt and it makes an already cramped space downright claustrophobic. And Lindsay, at the peak of her talents, lets out the most perfect sigh - she is scared, sad, lonely, nauseous... and maybe even a tiny bit relieved.

It used to be that Lindsay was too cool for us - we couldn't sit with her. But now, in one of those weird twists of schadenfreude that seemingly only happens to female former child stars, she's the one who can't sit with us. Looking at Lindsay now, I bet that at her best, most insightful moment (which I admit might not ever occur), she would also pick this as the Best Shot in Mean Girls. She might even look at this shot and feel the same way I do - that it speaks to that awkward, lonely teenager inside us better than any other moment of any other Hollywood High School film.
Posted by Daniel at 10:29 PM 1 comment:

Hit Me With Your Best Shot - Pocahontas

I suck at blogging.

I haven't even posted anything dance-related in... well, let's just say way too long and leave it at that. I guess that's what comes from actually having to work at teaching dance; I spend all my free time choreographing and planning lessons now.

But that doesn't matter, because I really like writing for The Film Experience when I can, and I especially like participating in Nathaniel's Hit Me With Your Best Shot series. It's fun, and when I've seen the chosen film and had to agonize over which shot to choose, it's more interesting to see what other people chose. It's a sense of community that I just love.

Anyway, this week's selection is Disney's Pocahontas. Not exactly the strongest film of the so-called "Disney Renaissance", but probably the most underrated. Coming as it did immediately following The Lion King, it was probably going to feel like a let-down anyway, but Disney does not have the best track record in dealing sensitively with other cultures (Peter Pan), so the choice to tell the story of the Native American Pocahontas and British explorer John Smith was probably not the best choice of story for them. And honestly, at it's best, Pocahontas feels more like a dry run for the much better Mulan than its own fully-formed film. Even so, I remember first seeing the trailer for Pocahontas when I was a young boy of about 10 and being kind of awed by it. The trailer was basically just the full "Colors of the Wind" sequence, but it was strikingly different from anything Disney had done before and in one spectacular moment, downright breathtakingly gorgeous:

THAT. Is so fucking gorgeous that you momentarily forget that the phrase "can you paint with all the colors of the wind" is maybe the most ridiculous lyric Stephen Schwartz has ever written (which is saying something). I don't think there's ever been a moment that impressionistic in a narrative Disney feature film before or maybe even since. It's completely singular, instantly recognizable, and bordering on iconic, a high-water mark for the film's animation. But it's not my choice for the best shot.

I certainly thought it was going to be when I sat down to watch the film, but that's the way these things usually go, isn't it? You think you remember a film, and then you watch it after many, many years, and you learn things you never knew you never knew.

Or, you know, you just see something that completely passed you by the first time. Whatever.

Anyway, my choice for Best Shot is contained in what is in my opinion the film's best song, "Savages". In it, the British colonists and the Native Americans each prepare to do violence to the other group, and sing a song with remarkably similar lyrics, prompting the (perhaps obvious) question of who the real savages are. It sounds a bit obvious, but it's a very mature theme for what is clearly a children's film, and the film doesn't shy away from it, coming up with some striking imagery of guns and cannons replacing the bodies of the colonists and of the Native Americans putting their warpaint on.

The best moment comes at the end of the number. As the two sides prepare, fires in both camps send streams of smoke up into the air, reflecting the growing shadows of their soldiers. The shadows get stretched and distorted almost beyond recognition as the clouds of war continue to expand, and they meet, like this: 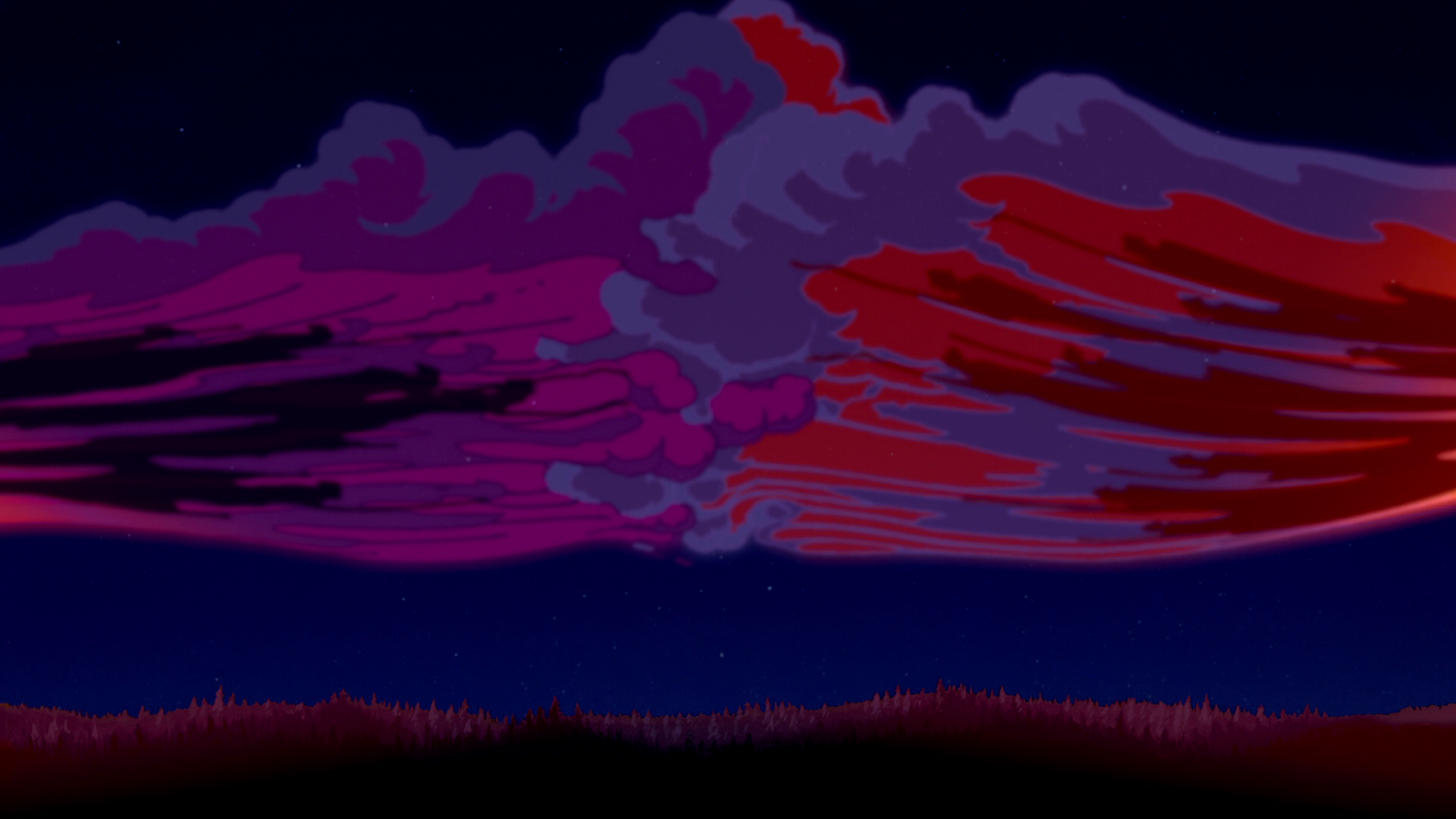 followed immediately by a crash of lightning and the end of the number. It's one of the best images of a vision of war I think I've ever seen, and it's something that couldn't really be done in a live-action film. There are more painterly shots in Pocahontas (which certainly isn't the prettiest of Disney films), but I think this is the most meaningful, the most multi-faceted, and perhaps the most adult. It's dealing with big themes that kids don't think about and visualizing them in a way that kids can understand at every level: it's clear not only what's happening, but that's what happening is wrong, and both sides are equally to blame. That's probably the best theme Disney was ever going to get out of telling this story, and this shot encapsulates it perfectly.

There's also room for a totally dirty interpretation of this shot that amuses me, even though I don't subscribe to the whole "Disney movies were totally dirty and made to fuck up kids without them knowing!" thing.
Posted by Daniel at 8:42 PM No comments: