Hit Me With Your Best Shot - 3 Women

I have a deep and abiding affection for Shelley Duvall (due to far too many viewings of Faerie Tale Theatre when I was young), Sissy Spacek (due to Carrie), and Robert Altman (due to Gosford Park), so it was a given that I would eventually make my way to 3 Women. It sits in an interesting place in all three of their filmographies: Altman had recently done Nashville, Spacek had just done Carrie, and Duvall was about to do The Shining. Spacek, for one, certainly comes into the film looking quite a lot like a resurrected Carrie White:


All buttoned-up with those big, innocent eyes taking everything in with a keen curiosity - and perhaps a slight bit of malevolence.

Believe it or not (and I still have a hard time believing this), Sissy Spacek and Shelley Duvall were the same age when they filmed this: 28 years old. It seems even more impossible when watching how they act opposite each other, especially when they're in a bar and Sissy's Pinky Rose (née Mildred) adds some salt to a beer to make more foam, blows it off, and then drinks the whole damn thing. Or better yet, just compare the above image of Spacek in this film to the below of Duvall's Millie (née Mildred):

They have similar body types - long and willowy with huge eyes, but I never in a millions years would have guessed they were both EXACTLY the same age.

Also, just to digress slightly for a bit, but someone needs to tell me how Duvall's Millie Lammoreaux isn't the biggest goddamn gay icon in the world. First there are the FABULOUS yellow ensembles (like the above which she puts on for a dinner party), then there is the CONSTANT chatter with anyone around without a care for whether or not they're listening, and the OBSESSION with women's magazines and throwing dinner parties with "fancy" food and just fabulosity in general, and FINALLY, there is the tragic downfall, complete with AMAZING cry-face:

Let's face it people: Shelley Duvall's Millie Lammoreaux is a lost gay icon, and we need to bring her back.

But anyway, back to the issue at hand: Picking the Best Shot.

I had not seen 3 Women before this, and it was somehow both more conventional and far weirder than I had been led to expect. It's certainly enigmatic, as I suppose befits a film that was based on a dream the director had and adapted to a treatment which he planned to shoot without a script. It also contains one of the most stunning dream sequences ever put on film. But it's all pretty straightforward until the last scene, which is so ambiguous that even the director claims to not know what it means. It's almost a prototype version of Single White Female, with Spacek as the girl who becomes obsessed with Duvall enough to take over her life, but it's also not that at all, really. It seems to me to be more about identity itself than the stealing of it.

Actually, the film it reminded me most of wasn't Single White Female, or Persona (which it has also been likened to, perhaps more accurately), but rather Jonathan Glazer's recent Under the Skin, in which Scarlett Johansson is an alien trying a human being on for size. Even as she is focused on her task of seducing men to do... something... to them, she shows a genuine curiosity about her prey and the race to which they belong. For the first half of 3 Women, Spacek gave a performance that felt very much like that, observing the actions of everyone around her, trying to understand what they mean, and trying to imitate them for a bit. She becomes fascinated by a pair of twins, wondering out loud if they switch roles each day and what it must be like. In my pick for best shot, she follows them as they leave work for the day, maybe a little too closely, and eventually starts walking exactly in step with them.

This is what it feels like to be a twin - to be exactly the same as someone else. She tries it on for size, decides she's gotten enough, and goes on her merry way. And then later on she decides (or perhaps she has already decided) she wants to be exactly like Millie - or does she? The film plays it coy about whether or not Pinky "becoming" Millie is a plot or if Pinky is just suffering from some kind of head trauma, but it's unsettling to watch nonetheless (not as unsettling as Under the Skin, mind you, but still...), and Duvall nails the feelings of fear, depression, and being lost that comes with the potential loss of identity.

(The film also gains a lot of horror from the casting, as Carrie White is pretty much the last person anyone would want obsessing over them - who knows what she'd do if you pissed her off?)

I'm not sure the film has a "titular" three women, although the ending would suggest it's Pinky, Millie, and Janice Rule's Willie. But there are many combinations of three women in the film, including plenty of shots of one woman reflected/refracted into three... and not to mention the women in the striking, haunting murals Willie is always painting. But this was the shot of three that stood out to me the most, and that is most likely to have an effect on my dreams.

BONUS: I don't usually post my "runner-up" Best Shots, but I just have to mention this shot of Janice Rule, which shook me to my core: 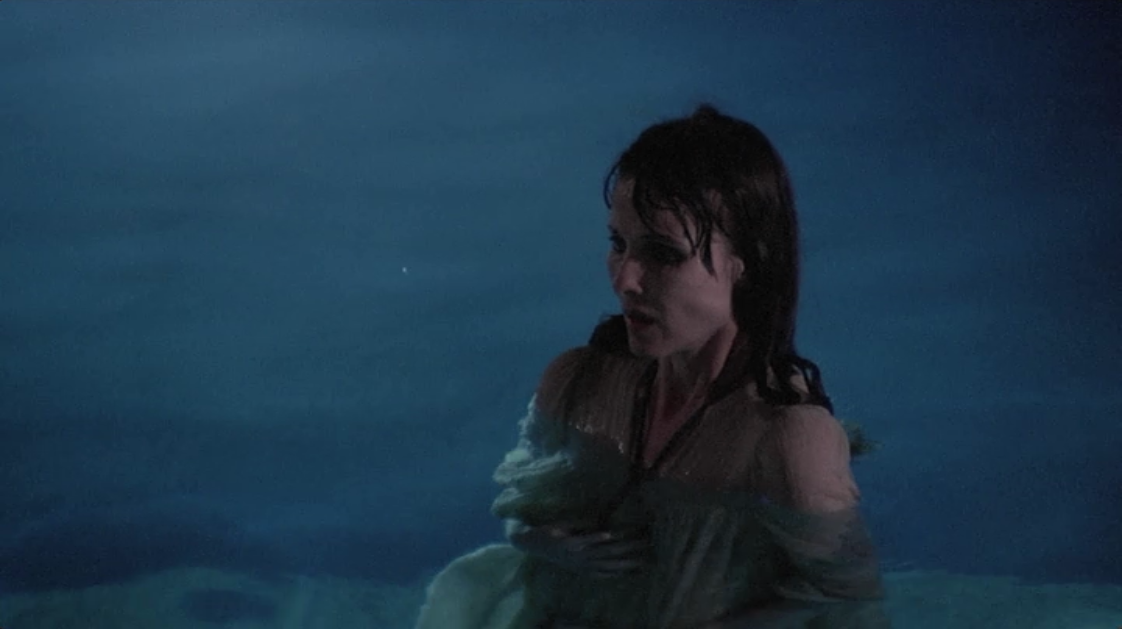 The still frame doesn't do it justice, but in motion, there was something about it that was absolutely haunting... and again reminded me of Under the Skin (I'm sorry - I saw that thing a month ago and it has taken up permanent residence in my brain. I still can't shake it - Nathaniel, can we PLEASE do it for next season of Hit Me With Your Best Shot?).
Posted by Daniel at 10:41 PM 4 comments: