Written as part of the weekly blogathon hosted by Wandering Through the Shelves. Join in the fun by picking three movies (or TV shows, as the case may be) that fit the week's theme and writing a bit about them.

One of the most frustrating things about TV shows is that you never know how long they're going to last. You can put hours of time into watching them and get attached to the characters only to be rewarded by the show getting cancelled at the end of its first season - if it even makes it that far! And this week on Thursday Movie Picks: TV EDITION, that's what we're talking about - those weird, wonderful shows that not enough people loved as much as we did to stick around longer than one season.

So NoTORIous (2006) Yes, Tori Spelling had a sitcom. Yes, it aired on VH1 for one season. And YES, it is HILARIOUS. It's a funhouse mirror version of Tori's own life, complete with dad Aaron Spelling appearing as a disembodied voice a la Charlie's Angels and, in the most brilliant stroke of casting, Loni Anderson as her mother. The series is "about" how Tori wants to be taken seriously and for people to like her for her (as opposed to her daddy's money), as well as how her upbringing at the hands of her self-absorbed mother has affected her. Co-starring Cleo King as Tori's beloved nanny and Zachary Quinto as her gay best friend Sasan, So NoTORIous is far better than  you would ever imagine it being - constantly surprising and occasionally even surreally bizarre.

Ben and Kate (2012) Kate (Dakota Johnson) is a hard-working, practical single mom. Her brother Ben (Nat Faxon) is a free-spirited professional underachiever. When Ben comes back to town after a long stint away, the two realize that they each might be just what the other needs in order to be their best selves. Heart-warming and humorous, I am at a real loss as to why this show wasn't a bigger hit than it was. Faxon and Johnson have great familial chemistry, Kate's kid is ADORABLE and an utterly unprecious actress, and the supporting cast is full of ringers, none better than Lucy Punch as Kate's best friend BJ, who more than deserved some awards recognition for her absurd, hysterical performance.

No Tomorrow (2016) What if you met the perfect guy, and he turned out to be a doomsday prophet? That's the dilemma facing Evie, a fussy middle manager at a supply warehouse, in the hunky, British-accented form of Xavier, the free-spirited and otherwise pretty normal guy she meets at the farmers' market. Xavier has science to back up his apocalypse theory, and he also has an "apoca-list" of all the things he wants to do in the eight months before the world ends. Evie falls for him (and honestly, who WOULDN'T fall for Joshua Sasse?), and gets caught up in his world, making her own list and crossing off items with Xavier. Romantic comedy is tough to get right on TV (you can only believably keep the central couple apart for so long, and most rom-coms end when they get together), but No Tomorrow does a damn good job of it, in part because Tori Anderson and Joshua Sasse have incredible chemistry, and in part because as the series goes on, both are revealed to be far weirder and more interesting as people than they seem at first glance. It also helps that the supporting cast, while in many ways stock characters, get fun storylines and actors that make them feel like genuine individuals. And honestly, the ticking clock of the apocalypse helps too - the focus of the series isn't a "will-they-won't-they-OF-COURSE-THEY-WILL", but rather a "how do these two people affect each other, for better and/or worse," which is much more interesting.
Posted by Daniel at 10:31 AM 9 comments:

Written as part of the weekly blogathon hosted by Wandering Through the Shelves. Participation is easy: Just pick three movies that fit the week's theme and write a bit about them. It's fun - promise!

This week on Thursday Movie Picks: Meltdowns. These can be lots of fun or very scary to watch, depending. But the greatest ones are the ones we watch happen in slow motion, not necessarily knowing what we're watching until it's too late. Ones like...

Sunset Boulevard (Billy Wilder, 1950) The fall of Norma Desmond, Greatest Film Star Of Them All (TM) is a true horror story, and Gloria Swanson's tremendous portrayal is a thing to behold. That famous final scene has become iconic for a reason - the direct address to the camera implicating all of us, the little people in the dark, in creating the monster she became and the pitiful thing she's become. One of the most brilliant films Hollywood has ever produced.

American Beauty (Sam Mendes, 1999) "I'm just an ordinary guy with nothing to lose," says Kevin Spacey's Lester Burnham. And, well, he actually does have something to lose: his life. This takedown of the seemingly perfect suburbia of America at the turn of the millennium is pitched VERY high, but the moments that work are all-timers: Mena Suvari doing the cheer routine, Lester serving his wife and her lover at the drive-thru window, Annette Bening singing "Don't Rain on My Parade", and that KILLER dinner table scene, a perfect meltdown from both husband and wife. And of course, there's also the video of that damned plastic bag, which you either love or hate.

Bridesmaids (Paul Feig, 2011) Annie is having a rough go of it. In the downturn of the economy she had to close her bakery, and now she has no money and is working at a job she hates. Oh, and her best friend is marrying an apparently pretty wealthy guy. AND wants Annie to be her maid of honor. And the pressure, well... let's just say it gets to her. Kristen Wiig's performance brilliantly toes the line between making us laugh with Annie and laugh at her, often at the same time. The entire cast is phenomenal, but none more so than Rose Byrne's delicious take on the wealthy, effortlessly likable (and effortlessly bitchy) Helen, and scene-stealer Melissa McCarthy, in the role that won her a well-deserved Oscar nomination.
Posted by Daniel at 7:00 AM 8 comments:

Written as part of the weekly blogathon hosted by Wandering Through the Shelves. You can play along by picking three movies that fit the week's theme and writing a bit about them - it's fun!

This week on Thursday Movie Picks, we are covering one of my favorite topics: Movies About Movies. It's always fun when Hollywood turns its lens on itself, allowing us to see the inner workings of how our favorite pieces of entertainment get made. Some of my favorite movies are about movies, but I've used them already for this series, so I decided to eschew those in favor of ones that I really like but haven't talked much about here.

Bowfinger (Frank Oz, 1999) Bobby Bowfinger is a movie producer who has finally saved up enough money to direct a film of his own - just north of $2,000! The only problem is, he needs a big company to handle the distribution. He gets one executive to agree, but only if he gets Kit Ramsey, the hottest action star around, to star. When that doesn't happen, Bobby decides to film the movie guerilla-style without Kit knowing. The problem is, Kit is already paranoid, and the film's alien invasion premise makes things worse, so he goes into hiding, forcing Bobby to hire a look-alike to finish the film. This very funny satire features Eddie Murphy as both Kit and his look-alike Jiff, Steve Martin as Bobby, and Heather Graham and Christine Baranski as two of the actresses working on the film. Bowfinger mostly forgotten now, which... honestly feels about right. It's not one of the greats. But it is REALLY funny, and more than worth a watch.

For Your Consideration (Christopher Guest, 2006) Leave it to Christopher Guest and his bitingly funny repertory troupe to make one of the most cutting satires about the film industry. No one is safe in this scathingly hilarious movie about a small, slightly overly self-important independent film that gets turned into the talk of the town because of one blogger's comment about it maybe being in the hunt for an Oscar. All the Guest regulars you know and love are there: Parker Posey is again a stand-out as the ambitious younger star on the rise, and Eugene Levy, Jane Lynch, Fred Willard, and John Michael Higgins reliably steal every scene they're in. But the genius Catherine O'Hara gives the performance of her career as the steadily working but un-famous character actress Marilyn Hack. She gives a completely vanity-free performance, exposing every nook and cranny of Marilyn's psyche as she is suddenly thrust into the spotlight. It's a brilliant performance in a killer movie.

Tropic Thunder (Ben Stiller, 2008) The novelty may have worn off a bit on this one, but I still laugh at pretty much anything, from Ben Stiller's maniacally committed action-hero posturing to Tom Cruise's delicious flights of fat-suited cursing to, above all, Robert Downey Jr.'s demented comic genius as an Australian method actor playing an African-American. Tropic Thunder may be a little bit stupid, but it's goddamned COMMITTED to it, and it plays like gangbusters for me, every single damn time.
Posted by Daniel at 7:00 AM 8 comments: 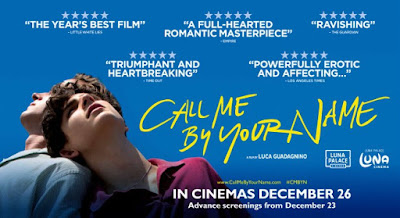 10. Call Me By Your Name (Luca Guadagnino) After seeing this for the second time, I kept trying to write a review and couldn't. The best review, I think, was my reaction on first seeing the film: I had found the first half or so a little too slow for my tastes, but when the lights came up at the end of the credits, I realized that I had been physically holding myself together so as to keep from falling apart in the crowded cinema. The cumulative power of this film is incredible, thanks to the patient observations Guadagnino makes and the stunning performances from the leads, especially Timothée Chalamet.

Email ThisBlogThis!Share to TwitterShare to FacebookShare to Pinterest
Labels: 2017, Best Of, Lists

Written as part of the weekly blogathon hosted by Wandering Through the Shelves. You can play along by picking three movies that fit the week's theme and writing about them!

This week on Thursday Movie Picks, we're going underground! Which either means literally below ground OR "under the radar". I'm going with the more direct interpretation this time, but only so I can include...

Journey to the Center of the Earth (Henry Levin, 1959) This Jules Verne adaptation is tons of fun, especially if you can deal with the slightly cheesy 1950s special effects... although, honestly, they're a large part of the fun! James Mason is a delight as he leads a team of intrepid explorers into a volcano and to the center of the earth, encountering all manner of prehistoric goodies along the way. Remade in 2008 with Brendan Fraser, and that version isn't too bad either, but I prefer this one.

Buried (Rodrigo Cortés, 2010) Another movie you shouldn't watch if you get at all claustrophobic, even if it does a lot with the restrictions of having your entire movie take place in a coffin. And even if it does feature a terrific performance from Ryan Reynolds. This is a one man show, and Reynolds is pretty damn great in it.